A Fading Beauty in Stone

Oita prefecture is the unrivaled heartland of Japan’s magaibutsu (Buddhist stone reliefs.)  While the old fief of Bungo is famous today for its plentiful hot springs (onsen), it is also home – somewhat mysteriously – to the largest number of lithic carvings in the country. Included among these are the twelfth-century national treasures of Usuki, in the south of the prefecture.

I recently went in search of one of Oita’s lesser-known reliefs, the Motomachi sekibutsu (stone Buddha.) Unlike most of the region’s carvings, which are found outside of small towns in the countryside, this stone deity is located in Oita City suburb of Furugo.  But don’t ask a local for directions to it; this neighborhood, thought to have been the capital of this land more than a thousand years ago, is a long walk from the central station, and hardly a well-known tourist destination.

I went there because longish walks attract me, and soaking in hot springs is nice, but not my raison d’être.  To my mind, pondering a thousand year-old work of art adds a bit of dimension to the day.

The Motomachi relief is housed in a temple-like shelter on a dead-end street just a stone’s throw from the tracks of the Kyudai railway.  There isn’t much around, houses and a highway, though just around the corner is an old tumulus (but don’t expect much there.) As you enter through the gate and approach the shelter you notice to the right an exposed stone cliff; it appears that carvings might have once adorned this outcropping, but are now gone.  On the double doors before you hangs a sign that says they shall be kept shut; but the doors are unlocked, and there is no fee to enter.

The Characters in Question

Inside the doors is the central carving of the Yakushi Buddha.  It is nearly three meters in height, larger than most reliefs, with a face quite serene but also sadly deteriorated. According to the literature the damage to the carving is the work of salts that have soaked into the volcanic rock over the years. 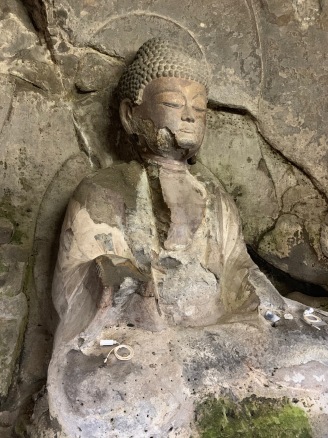 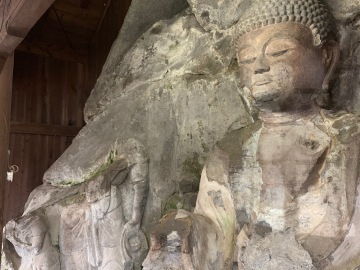 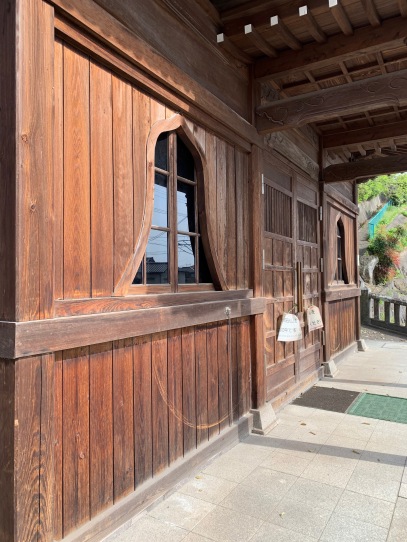 Yet it is surprising that so much of the central figure still exists; the attendant deities on either side, Fudo Myoo (the Warrior King) and his disciples Cetaka and Kongara, on the right, and Bishamon (the God of Wealth), Kissho and Benzaiten (I think), on the left, are largely disintegrated, far beyond the point of restoration.  (Nor can I understand how the identities of the deities on the left were construed; they are no more than fragmented, ghost-like outlines on the stone.)

The oldest photo of the central (Yakushi Buddha) figure, dating from 1915, shows it protected within an open shed under a bulrush roof.  Indications are that as early the Edo period efforts were made to protect the central figure, with plaster added in the Meiji or Taisho era to repair the worst damage.  Still, it is amazing that the original carving endured as well as it did for so long; the work is believed to date from the middle to late Heian period (795 – 1185), and clearly reflects the Jocho school of carving, with obvious similarities to Jocho’s Amida Buddha of the Houou-do (Phoenix Hall at Byodo-in.)

A Treasure Worth Preserving

In recent decades concerted efforts have been made to save this treasure from further deterioration, including the construction of tunnels under the surrounding rock to divert water, and the injection of resins into the carving itself to slow its disintegration. Sensors have been placed on the effigy, as well, to detect and record changes in the rock substrates. In 2012, UNESCO designated the site for further study and preservation.

Once a Splendid Thing

Yet it appears that nothing will stop the continued dissolution of this old religious icon, which must have been a splendid sight for several centuries after its creation.  In those days there would have been nothing to block an expansive view of the wide Oita River and distant mountain ranges beyond.  Given the natural positioning of the figures, and the unique mise-en-scène, the entire stone retinue would have appeared fluid and lifelike.  Among the many reliefs of Oita, it was probably once the most beautiful of all.

The Motomachi magaibutsu is a 40-minute walk from Oita Station, or a 16-minute walk from Furugo Station (but not many trains stop here.)  If you are good with the bus system it is a two-minute walk from Yakushido stop.  Use your GPS to locate ‘Motomachi Sekibutsu’; hopefully your internet connection is good.