It may not be what you think

One of Japan’s leading cast iron cookware companies, Oigen Foundry, a member of the Nambu Tekki Cooperatives Federation of Iwate, Japan, recently announced that the group had lost its eight-year battle in Chinese courts to retain its “Nambu Tekki” trademark. (‘Nambu’ is a Japanese name, ‘tekki’ the Japanese word for ironware.) In China, the right to use this venerable Japanese brand now belongs to a “third party.”

Why this is significant to Japanese manufacturers, and to those wishing to purchase high-quality, Japanese-made ironware goods, is multifold. Before discussing these ramifications, let’s briefly review the history of Japan’s Nambu Tekki industry.

A Long and Illustrious Tradition

Cast iron kettles and cookware are a traditional industry of Iwate Prefecture, in Northern Japan, where iron casting has been practiced since Fujiwara clansmen built the northern capital of Hiraizumi, in the year 1090. Many of Japan’s oldest foundries, and the finest of its artisanal producers – including families in continuous production of these goods for over 400 years – are clustered in this region, where iron-bearing sand, carbon for coking, and good clay (for casting molds) are found in abundance.

Nambu was the name of the lord and clan that controlled this area during the Edo Period (1603 – 1868), when the fluorescence of Japanese arts, including the Tea Ceremony, created new demand for chagama (ceremonial tea kettles) and other refined cast iron merchandise. It was at this time that the Nambu brand gained prominence throughout Japan.

The first association of local producers using the Nambu Tekki name was established in 1948. In 1972, this group was renamed the Nambu Tekki Cooperatives Federation of Iwate.

Along with their exceptional durability and artistic craftsmanship, Nambu Tekki kettles are said to soften the flavor of water, and infuse it with traces of iron, an essential mineral often lacking in the modern diet.

The appropriation of the Nambu Tekki trademark by a third party in China is a potentially damaging turn for Japan’s cast ironware producers, who have already been hit hard by a deluge of cheap, mass-produced replicas of questionable quality and material purity. Now, ironically, genuine Japanese goods can no longer be exported to China under the original brand name.

One can safely say that, outside Japan, the Nambu Tekki name – which once represented a heritage of uncompromising quality – has come to symbolize the immoral and rapacious character of modern global business.

Perhaps more importantly, the sanctioned theft of this trademark has allowed these low-quality knock-offs to be deceptively marketed as “Japanese Nambu Tekki.” How serious is this deception? A search of “Nambu Tekki” or “Japanese cast iron teapot” on Amazon.com will produce dozens of results, all labeled as “Japanese Nambu Tekki teapot” in the product description, yet nearly all fakes – low-priced knock-offs using original Japanese patterns and designs.

To the eye of an ironware expert these copies might be laughably obvious, but what about to the father in Minnesota, looking to buy his daughter a graduation present to take to college, or the frugal tea-lover in London or Singapore, seeking the health benefits of a pure cast iron kettle of the highest quality?

And for collectors considering the purchase of an heirloom or antique Japanese teapot – perhaps in a rare, square-shouldered mozuya form, or a classic turtle shell shape, possibly with the traditional hailstone surface pattern, or a lovely stallion and cherry blossom motif – be advised that online auctions like Ebay, and all the rest, are infested with forgeries and counterfeits.  Don’t be fooled. Even on the streets of Tokyo, great care must be taken when shopping for genuine Nambu Tekki.

Before I pitch a visit to this gem of architectural history, a word of caution; if you like throngs of sightseers, busy souvenir traps and long, clamorous lines outside noodle and ice cream shops, Unnojuku is not the day trip for you. This old post town in Nagano Prefecture is a portal to the past, and can look rather like a ghost town on a chilly, mid-winter’s day. The food here is for thought, and what you take away for memory and the imagination. 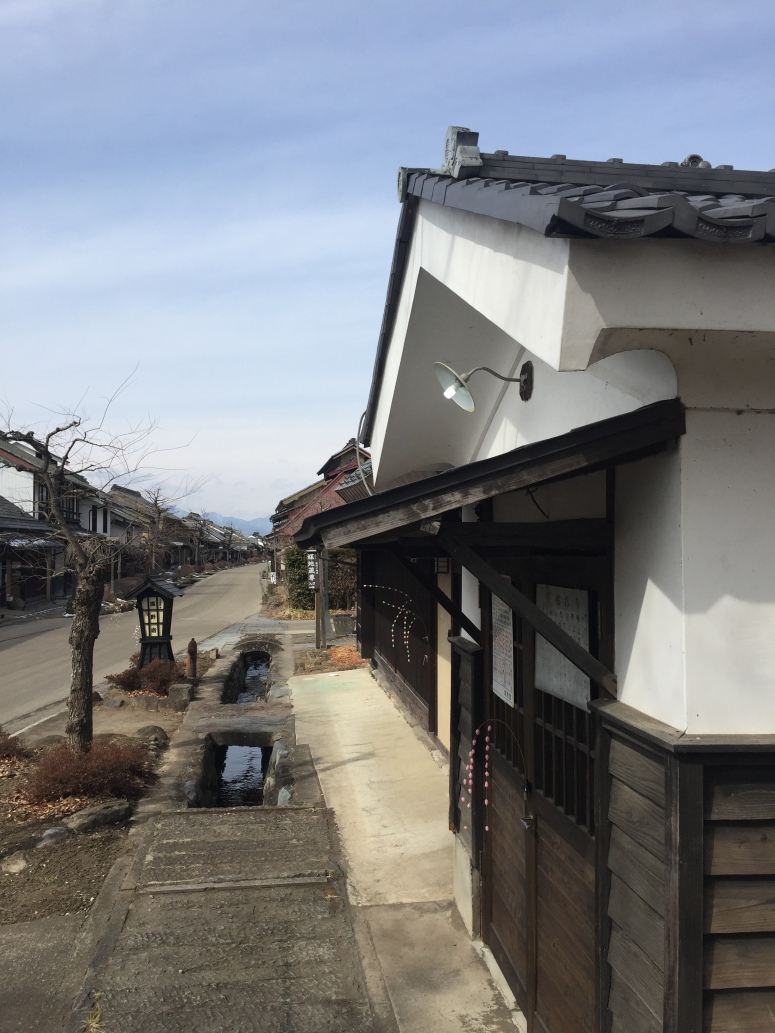 Ninety minutes or so from Tokyo on the Hokuriku Shinkansen, and a short taxi ride from Ueda Station (or a twenty-five minute walk along the free-flowing Chikuma River) Unnojuku was a wayfarers’ stop and sericulture (silkworm raising) center in Edo and Meiji times. Today this old streetscape, with dozens of well-preserved structures hundreds of years old, is designated as one of Japan’s National Conservation Areas.

In fact, the history of this location dates to the Heian and Kamakura periods, when the surrounding lands were controlled by the Unno clan. Centuries later, when Japan was united under the Tokugawa government (1600-1868), Unnojuku was born (“juku” meaning a place to stay, or lodge.) Ideally situated on the North Road, which was used for the transport of gold from Sado Island to Edo, and by pilgrims traveling to and from ancient Zenko-ji Temple, its prominence and wealth quickly grew. 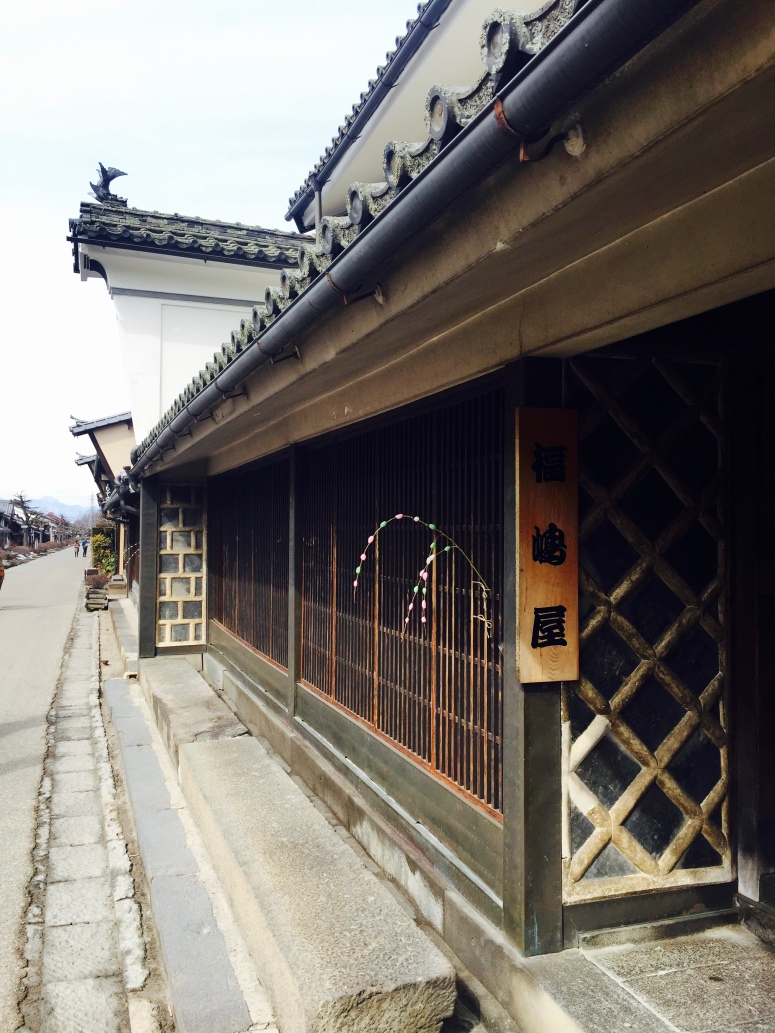 Some of the architectural styles preserved here, such as the ornamental projecting shoulders (sode udatsu) on the large inns, are as striking as any to be found in Japan, and a sign of the prosperity the town enjoyed. Along either side of the stone brook one sees intricate, Unno-style latticework, decorative tile facades, basic projecting shoulders (hon udatsu, which served to hinder the spread of fire), heavy beam construction and the fine finishing work so typical of this period of Japanese town architecture. 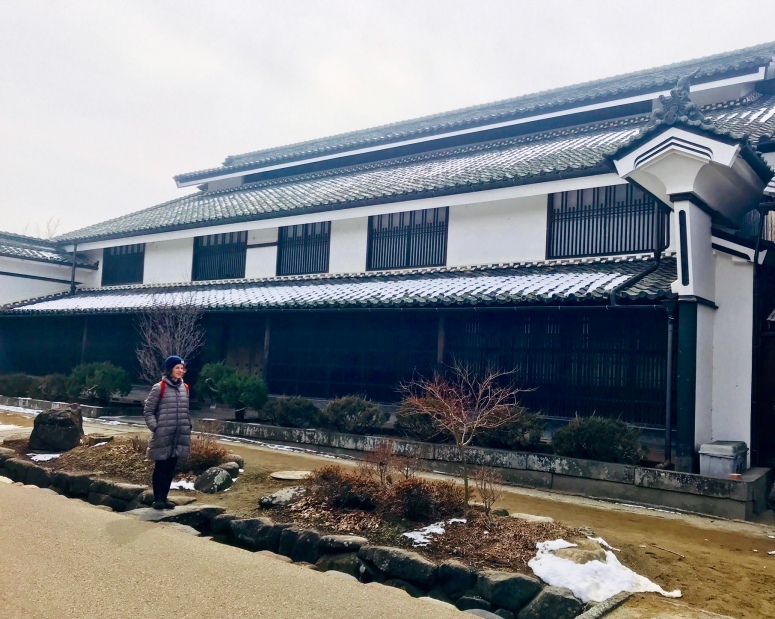 Because the area turned to sericulture in the Meiji era (when traffic on the highway fell off due to the construction of railroads) numerous structures were modified with secondary, ventilated (kinuki) roofs, and other features unique to the keeping of silkworms. It is this variety of architectural specimens from the middle Edo period to the early Meiji era, and the combination of functional and decorative elements, that make Unnojuku such an invaluable cultural asset. No wonder it is included in Japan’s “One Hundred Best Roads” collection. 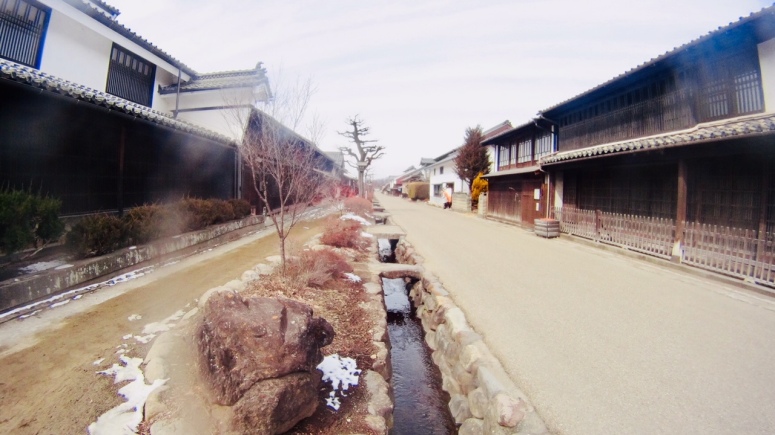 On a quiet weekday you may find that just about everything along the street is closed. If you prefer music and dancing, come for the “Fureai” festival in late November, when characters in period garb fill the streets. In warm months, when the willows are green and the flowers are blossoming, the soba and coffee shops will be open, allowing you to relax inside, sip tea and nibble sweet manju, while observing passers bye like a wealthy Japanese traveler of long ago.

Shiratori Shrine, a vestige of the days when the legendary warrior Minamoto Yoshinaka (1154 – 1184) came here to muster forces against the Taira, stands at the south end of the street. Here a massive Zulkova tree, over seven hundred years old, shades a small fountain and the surrounding grounds. If old Japanese architecture isn’t your thing, you might want to have a look at this tree, and ponder all that it has witnessed over the centuries. 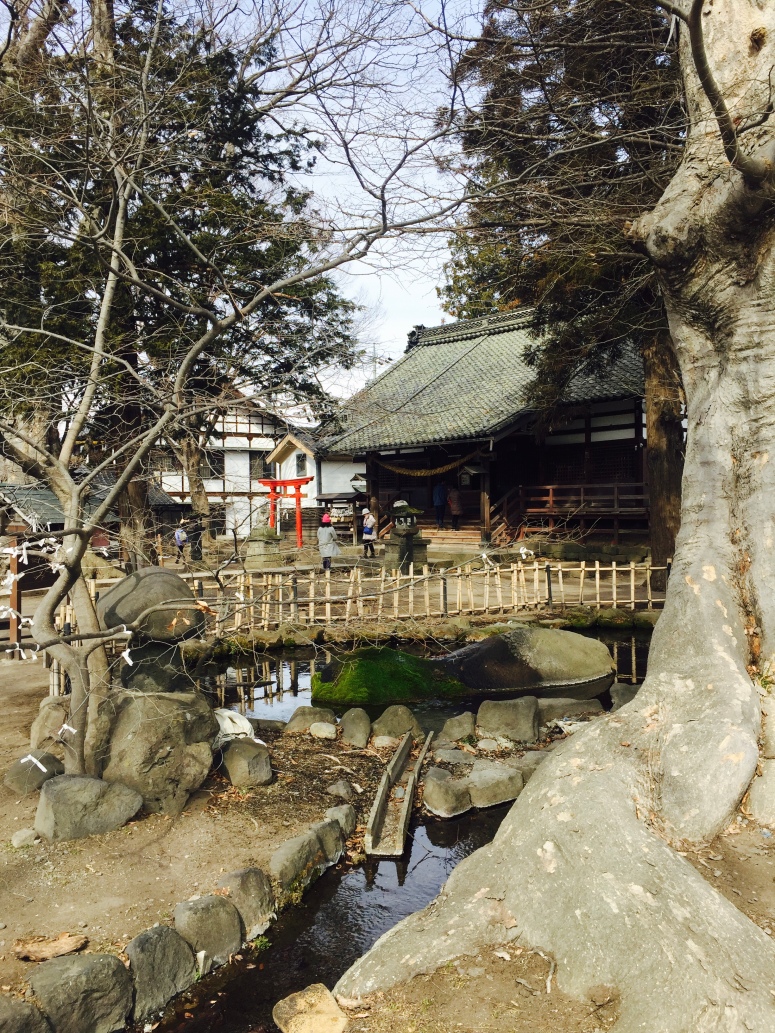