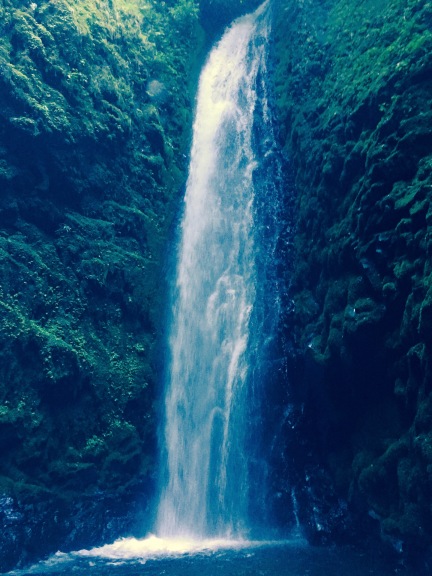 The highest concentration of old stone reliefs found anywhere in Japan is in south and central Oita prefecture, on the island of Kyushu.  This scenic region of volcanos, forests, rivers and small farming communities includes the famous Usuki reliefs, the only magaibutsu counted among Japan’s national treasures.

Note: Immoveable renderings etched into natural stone are referred to in Japanese as magaibutsu, in contradistinction to free-standing stone statues of Buddhas, commonly called sekibutsu.

Many of these symbols of Buddhist faith are carved into the relatively workable volcanic tuff that abounds in this part of Kyushu.  While the ejecta from the eruption of nearby Mt. Aso, some 90,000 years ago, was ideal for such detailed carving, it is also prone to erosion and disintegration.  Many of the images are so dilapidated as to be unrecognizable, while others are in much better states of preservation.

The reliefs undoubtedly share more in common than their material composition, but the story of their creation – who initiated the works, who carved them, and why – remains largely a mystery.

The Treasures of Bungo Ono

Not far from lovely Harajiri Falls, in the Ono district of Oita, Japan, are the infrequently visited Miyasako reliefs, which are more often referred to by the locals as the Ogata sekibutsu (the ‘stone buddhas’ of Ogata, the historical name of the area.)  There are actually two sites in close proximity, the West and East reliefs, both with painted high reliefs. The East collection is the one in better condition. (Only this area is shown in the photos to follow.)

The surrounding landscape is dominated by terraced rice paddies and thickly forested hills. From the parking turnout (where there are separate restrooms) a paved trail of several hundred meters leads up to the East reliefs. In fact, there are two paths, with no sign indicating which to take. Use the one on the right as you face the hillside; it goes directly to the site. (The left will also get you there, so long as you follow the faded “sekibutsu” sign pointing right a few hundred meters up the trail.)

There is no temple or shrine at the Miyasako reliefs, and no indication there ever was any.  The carvings are estimated to be over 800 years old.  The central statue of the East relief is of the seated Dainichi Nyorai. Though the overall condition is quite deteriorated, the face evokes a recognizable and startling expression of wonderment and human-like imperfection.

Note: The Miyasako East Dainichi Nyorai is flanked by the Wisdom King (Fudou Myou-oo, to his left), and the God of Wealth and Warriors (Bishamonten) to his right, as well as one (remaining?) Nioo warrior.  This very martial line-up causes one to ponder if the commissioner of this relief might have been Lord Oogata himself, who gained much fame in the final battles of the Gempei War (1180-1185.)  Could the famous samurai’s own visage be the model for the central figure’s face?  It is likely no one will ever know.

The Sugao Reliefs are located a few minutes drive off the main road that runs from Oita City to Ono-gun, just north of the small community of Sugao.  Old country homes, neat hedges and small rice paddies make for idyllic scenery along the nearby Ono River.  Signs for the Sugao Magaibutsu (菅尾摩崖仏) show the way to a large parking area, which is equipped with clean restrooms.

The paved path to the reliefs is an intense five-minute walk. Though short, the steep incline requires good legs; anyone not in decent shape will need to rest often.

The effort to reach these works of art is well worth it.  Upon approaching the reliefs, sensor-equipped lights switch on to illuminate the statues.  A recording let’s you know that a security camera is in operation, but that’s all.  A minute later, the illumination shuts off, and the images are returned to the filtered, natural light of the forest.

The Ministry of Cultural Affairs has designated these reliefs a significant cultural asset, just one rank below national treasure, and this may be unfair.  Though not on the scale of the Usuki Buddhas, the high-relief carvings of the Sugao pantheon, taken on their own merits, are surely priceless gifts from an age long past. 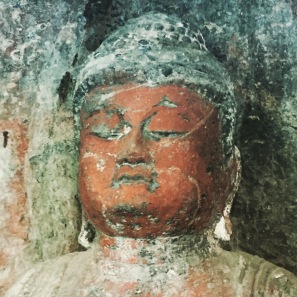 Note: The characters of the Sugao relief are (from left to right, facing the carvings) Senjuu Kannon (the Goddess of a Thousand Hands), Yakushi Nyorai (the Healing Buddha),  Amida Nyorai (the Buddha of Light), and the Juunimen Kannon (Goddess of Eleven Faces.)  Of obviously lesser importance is the additional, smaller Bishamon warrior, just to Juuichimen’s left.  As at Usuki, the Sugao relief seems to focus much less on the symbols of war and retribution, and much more on representations of enlightenment and mercy.

A fifteen-minute drive from the scenic town of Bungo Taketa lies a rugged vale harboring Fukou-ji temple, where the largest of Bungo Ono’s stone reliefs is etched upon a cliff of red volcanic tuff.  This temple is famous not only for these reliefs but also for its hydrangeas, which bloom in purple profusion during the rainy season, from late May through the end of June. 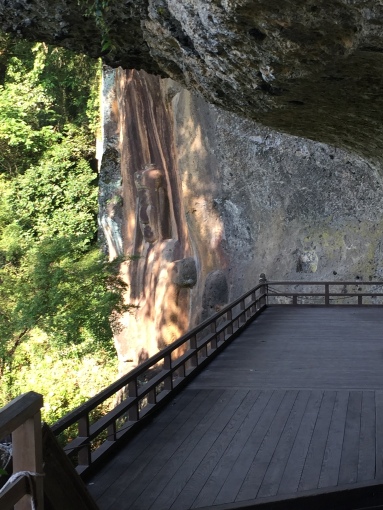 This is a very different scene from the other local renderings, the images being low reliefs of considerable scale, carved into exposed vertical rock, and visible from afar.

The central Wisdom King (Fudo Myo-oo) image is fifteen meters in height.  His expression was perhaps once threatening, but is now simply somber, as it is obviously weathered after so many centuries of exposure to the elements.

As is typical of renderings where the Warrior King is central, the “Fudo-sama” (as he is often called) is flanked by two lesser warrior deities.  It is the introspective yet fervent aspect of Cetaka, to his right, that lends a great sense of profundity to this triad.

These carvings are said to have been made during the early Kamakura period, but little else is known about their origin.

Note:  It is speculated that many of the reliefs of Ono-gun (and Usuki, and perhaps other areas in southern Oita prefecture) were created under the auspices of Lord Ooga, who controlled the area at the end of the Heian period (794–1185AD.)  Given that this clan included the Ogata, Usuki and other warrior families, it is certainly a promising theory.  But apparently there is nothing in the historical records definitively attributing these creations to specific individuals.  (If I am wrong about this, which is quite possible, please let me know!)

In any case, similarities and differences between the various reliefs – resemblances being distinct between the Usuki and Sugao reliefs, while Fukou-ji and Miyazako stand as outliers – invite plenty of speculation.  And what of stylistic commonalities with nearly contemporaneous Buddhist reliefs and statues in China (Dazu) and Cambodia (Angkor Thom)?  One wonders what influence, if any, these works might have had upon each other?  Please let me know if you can find any evidence of this.