Our friends at Videri won for their delectable 70% Classic Dark Chocolate (we’ve been fanatics of this one for years!!) and Lavender Black Pepper Carmel, while our neighbors at Smog City Brewing Co. earned a prize with their Kumquat Saison. We’ve tasted this lovely brew, as well, and can attest to the superb craft that has gone into all of these products.

The Good Food Foundation gives awards in over a dozen categories of artisanal foods (snacks, spirits, coffee, confections, oils, to name a few) that meet its stringent standards, including locally and responsibly sourced ingredients, socially responsible and sustainable practices, no GMOs, organic ingredients, low or no chemical production, and other guidelines specific to each category.

Of Ramen and Road Warriors 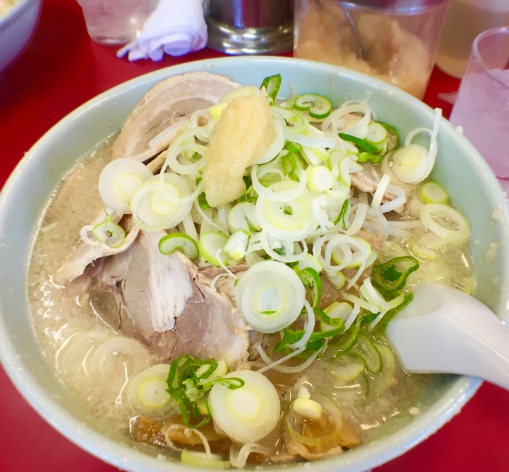 Here is a story steeped in the broth of legend; a tale of loyalty, gratitude and – I vouchsafe it – some very good noodles.

Many years ago there was a ramen shop in Horikiri that brewed an especially rich pork bone soup. The place had a following – truckers, night owls and the like – but traffic was never heavy.  It was on the outskirts of town, far from the nearest train station, with nothing separating its counter from the street but six or seven rickety stools, an old noren and the sidewalk.  Like the famous warrior monk of old, the shop was named Benkei.

One day, out of the blue, a cab driver domiciled nearby was invited by a popular TV station to be the host cognoscente of a daytime docu-series on preferred eateries of the local working folk.  How he was selected for this distinction is a mystery, but who knew him agreed he was perfect for the role.  When asked to produce a list of his favorite food stops, he did so with little hesitation, and one of them was – you guessed it – Ramen Benkei.

There’s no need to describe in detail the events that followed.  I won’t recount how, under a hot strobe, with the videocam rolling, the cabbie hunched over a bowl of his favorite miso chashumen, sucking down that thick miasma of crushed garlic, diced green onions, sliced pork and egg noodles with the facedown determination of a sumo wrestler.  Grunting caveman responses to his  interlocutor, he remained focused on the bowl until, with his last slurp, he pushed it away with both hands, belched and calmly wiped the sweat from his brow.

One day, many weeks later, in this land where no one pays their public television fee collector a plastic penny – but still watches NHK daily – a gaggle of utter strangers formed a short line on the sidewalk outside that little ramen shop.  Street traffic slowed and clotted, with rubbernecking, and even some honking.  A hedge of bicycles grew helter-skelter along the curbside.

As days passed this phenomenon only intensified.  Within a fortnight, Ramen Benkei had swarms of hungry bodies waiting outside, waiting patiently to taste the storied fare.  Word spread like wildfire, and Benkei was suddenly catapulted from serving a few dozen customers a day to feeding hundreds and hundreds.  (The occasional female was even spotted in the crowd!)  Pundits claim that this was the exact moment when Japan’s ramen “boom” was ignited; MSG stock tripled in value overnight.

All this occurred some 35 years ago, just about the time the above-mentioned cabbie became my father-in-law.  By then, the owners of Ramen Benkei were already sending him gifts of gratitude each summer and winter, something they have done without fail ever since, even as they have opened new locations in old Tokyo.  In fact, after being implored countless times by the cabbie to desist from their kindness – and even after learning from the driver’s wife that her husband had departed for that eternal noodle stand in the sky – they continue to honor their benefactor’s widow with delicious o-chugen and o-seibo gifts to this very day.

Benkei has locations in Horikiri, Asakusa and Monzennakacho.   Only downtown Tokyo is the real deal!  Everything west of Shinbashi is fake news!  So slip into your geta, and go get some real ramen now!

It is said that the warrior monk Musashibo Benkei singlehandedly battled a force of three hundred attackers while defending his beleaguered master, Yoshitsune Minamoto.  Refusing to retreat, he made a stand on a narrow bridge, and fought to the death, annihilating great numbers of attackers while Yoshitsune calmly committed ritual seppuku.

In the proper posture of a true noodleman, Benkei died standing up.

This all happened a long time before the invention of the ramen shop.  May it never be forgotten!